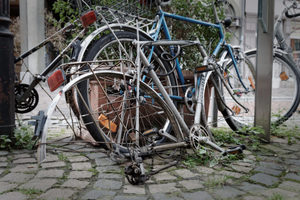 Jack and Jamie were keen volunteers at the bike recycling project. They loved getting an old bike in and giving it a new lease of life. There was nothing better for them than giving someone a new bike who needed it.

As the project grew more volunteers joined. Lucy asked if she could come and help out once a month. Lucy especially loved working on the BMX bikes. Then a few months later lots more people came to help – Morgan, James, Kieran, Kelly. They would each come for a bit and then get a bit bored. But every week, Jack and Jamie came without fail.

At Christmas the leader suggested that we host an auction to raise the profile of the project; so they fixed up 10 bikes and auctioned them off at the Christmas fair. Unexpectedly the project raised £500. The group were overwhelmed.

The volunteers agreed together that they would give half the profits to a local children’s charity; and the other half would be split equally between the group. Lucy counted it out, and everyone had £35. But Jack & Jamie started to grumble: ‘we did so much more work than the others; Lucy only worked on BMX’s, and Kieran only came twice. We should get some of that other £250 too’.

‘This was never about the money’, the leader said, ‘you came each week for the love of repairing a clapped-out bike and finding it a new rider’.

Frontier Youth Trust first published this parable as part of talesretold.org, an online scrapbook that brings together a wide collection of parables to resource pioneering discipleship and inspire story telling.