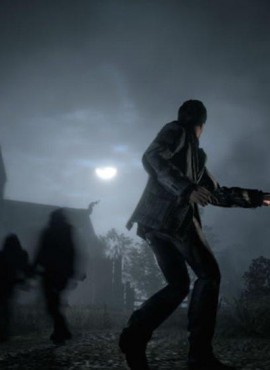 Alan Wake is a survival horror adventure on the Xbox 360. You control Wake, an ill-fated writer, as he journeys into the collapsing nether-world of his imagination. If this doesn’t sound like your cup of tea, hold judgement a moment as I felt just the same before playing.

My sensitivity to horror films usually makes me steer clear of them. Since watching The Thing at an early age and being left with a variety of alien-like nightmares, horror usually seems like too much emotional hard work for too little gain.

However, Alan Wake quite unexpectedly became a cathartic experience for me. Unlike watching a film, being in control meant that I could dictate the pace and direction of each unsettling scenario. Furthermore, because the game-world exists as a whole, rather than as discreet levels, it became a familiar space in which I felt safe enough to engage my fears.

On the surface Alan Wake appears to be about the thin line between creativity and insanity. It works hard to be more than a derivative excuse for shooting and decapitation. A narrative conceit has the player, as Wake, trapped in a story he is the writer of, and must escape by mustering up the nerve and clear thinking to write a suitable resolution to the horrors thus ending the nightmare. To do this he faces various locals (the “taken”) who are possessed by dark spirits that must be freed using his flashlight before being dispatched with his shot-gun — the contradiction in these actions passing unnoticed.

However, underpinning this pulp-horror fiction is something much more interesting — the landscape in which you play. Through a peculiarity of development Alan Wake isn’t a game any developer would set out to make – it’s an open world experience that only grants access to as much of that world as is required by the narrative. Under normal circumstances this would be a huge waste, since much of the effort invested in the world will never be seen by the player.

Remedy Entertainment’s long gestation with Alan Wake started out as an open world game you could explore at will. Some time later, after much of the open world work was completed, it was narrowed down to a directed experience more in vogue with modern players.

This strange provenance gives Alan Wake a unique sense of place. When playing the game you can see your next destination in the distance getting slowly closer. The agony and fear of safety within sight but just out of reach is effective because these distances actually exist in the game’s geography.

Your path is directed through forests, roads and valleys. But again, because it was initially an open world game you can stray from the path should you wish, without being forced back on track. The fear of being lost in the landscape feels ever present because you really can go astray.

While this all adds to the foreboding, more interestingly it also mitigates against it. The real geography of Alan Wake connects every encounter to the world around you in the game. Not only can you progress at your own speed but also make creative use of your surroundings — shelter, circumnavigation, concealment and high ground. Unlike a horror film where the viewer is captive to the director’s lens, here you are able to take charge of both pace and direction. You can get to know the world in intimate detail and grow to rely on its consistency.

The valleys, lakes and forests steadily underwrite the story with a sense of perspective. Much like the deserts, mountains and seas of the biblical narrative the land of Alan Wake quietly suggests everything will be alright the morning after, or when the promise of the destination is reached.

Underneath its pulp-horror, Alan Wake is a fascinating study of how landscape functions in our psyche. Even in the thick woods of the dark unravelling night hope is present in the very locations we are running through. Stripped of other securities we discover that the wild is in fact our companion rather than our adversary. Things aren’t permanently dark because of the ongoing nature of the world in which we play.

It’s here that the main story of Alan Wake works in tandem with its environment. As Wake finally manages to get his psyche under control, to face his personal fears, the world around him also falls into its proper place and shape. Even as we find safety and refuge for Wake in the mountains and canyons, he finds the strength to cling on to his sanity in the overrun woodland paths of his inner terrain.

I had expected Alan Wake to be an interactive horror film. Although it does use filmic techniques to shock and frighten the player, what stays with you is the Pacific Northwest landscape that wraps around you like a warm blanket while you run for your life.