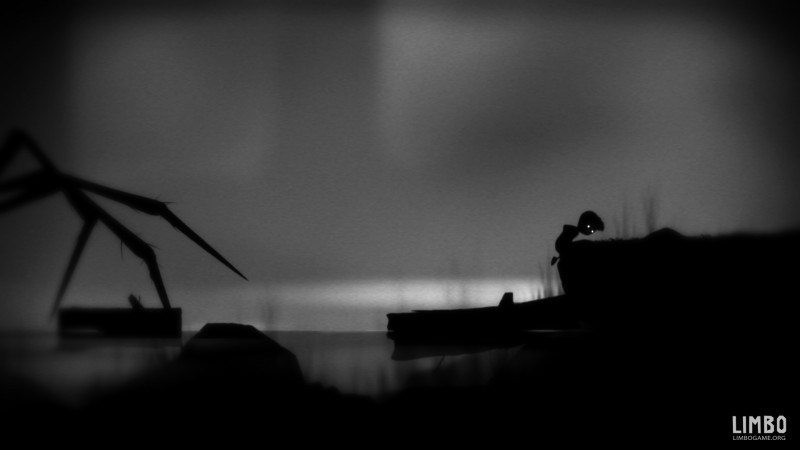 Now a new breed of platform game is emerging that asks more of the player than a steady hand, quick reactions and a ready supply of adrenaline. Braid, Super Meat Boy, Fez and LocoRoco are smart, simple and wear their personality on their sleeve. Limbo easily stands out amongst these platform game peers through its ability to unnerve as much as frustrate. Originally available on Xbox 360 then on PS3 and PC, it’s now coming to the Mac.

It’s desperately bleak, but beautifully so. Black and white hues create the feel of a filmmaker’s lens through which you view the world.  You control a small boy as he travels through a threatening forest landscape. Despite the darkness at first it feels like a children’s game. That is until the little boy meets a variety of shocking silhouetted ends, is impaled, decapitated, squashed or drowned, and it becomes clear why this is a PEGI 18 rated experience.

The game emits sounds to match the sparse visuals. Breathless echoes and hums gnaw away at the back of your consciousness as you focus your attentions on survival. However impressive and unusual this unresolved physical and aural landscape is for a videogame, it’s Limbo’s commitment to an unresolved narrative that is most unexpected and unsettling.

It’s reminiscent of Hansel and Gretel, but with a breadcrumb trail of platforming elements to lead you on. Pulling boxes, climbing trees and running from spiders you eventually emerge panting from the forest. However the mood remains dark as the fear of dense trees is replaced by the threat of desperate inhabitants, booby trapped corpses, dilapidated architecture and wayward industrial machinery.

Limbo will be too bleak, too graphic and too indulgent for some. For others it will be simply too difficult — even a seasoned player can find themselves flummoxed. However, for those willing to dive in and pay these costs Limbo has much more to offer than entertainment.

Loss isn’t something we easily spend time thinking about. Job, Ecclesiastes or Cormac McCarthy’s The Road can be bleak and battering. Like those depths though, Limbo keeps in mind a thread of hope, the idea of the morning after, of waking from the nightmare. And because it’s a game, playfulness, engagement and possibilities are never eclipsed.

Whilst other games would be unable to resist cashing in this tension, capitalising on the loss with a triumphal ending, thankfully developers Playdead resist this habit. The end, when it comes some four hours later, is tranquil and quiet and unexpected. As with The Road, Job and Ecclesiastes there is no escape from the nightmare for our protagonist. Instead there is presence. We encounter a companion, a kin and are fleetingly renewed.

The moment of encounter, that I won’t spoil here, is transformative. In many ways nothing is different, darkness continues. At the same time though, everything is different. The presence of “another” changes the game world from a dangerous alien environment into a place that might become home.

The desire to flee is diminished and we ourselves are transformed into the hope for Limbo’s deathly landscape. We, beyond the screen, are asked what real hope is, escape or residence?