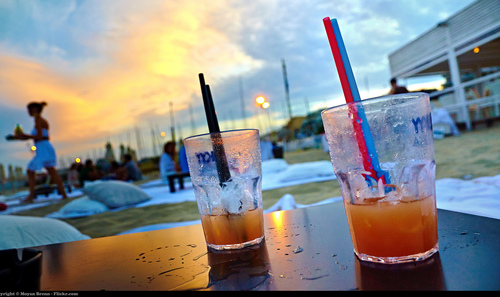 Sarah had always had it easy, her father earned money, pots of money.  He was well known through out the town for the many lucrative businesses he owned.  He had several houses in this country and abroad, and the house he lived in with his family was more a mansion than a house.  They had expensive cars, wore expensive clothes and had a great life.  So when it came to throwing a party for Sarah’s twenty first they weren’t going to skimp on anything. They started looking for a venue big enough to hold what would be the party of the year. They would invite Sarah’s friends from the private school she attended, her father’s business acquaintances her mother’s friends, the ‘ladies who lunch’, and all the great and good of the community.

After much searching they found the only venue big enough for such a party, was the local football ground.  They arranged to put Marquee’s up on the pitch, and booked the country’s top caterers.  They sent out invites, on the highest quality handmade paper, each individually printed in gold ink.  Everyone knew this was going to be a party to remember.

After weeks of preparation the day of the party finally arrived, the family dressed up in their finest clothes and got into the limousine that was taking them to the football ground.  They arrived early to welcome all their guests.

When they got there, what a sight beheld them, the tables were laden with a vast array of food.  There was the best food from the Far East; Cantonese, Chinese, sushi.  Top Indian chefs had provided a decadent display of dishes.  There were the most exquisite European dishes and even burger and chips!  Whatever food you fancied it was there.

It was soon eight o’clock when the guests were due to arrive and the family stood waiting to greet their guests.  But eight o’clock came and went, then eight thirty and still no guests.  Sarah and her family couldn’t understand why no one had arrived.  They’d had a few apologies from guests who had other commitments.  Some had business meetings to attend, some were going shopping in New York, and some were just too busy to fit the party into their already tight schedules.

They started to wonder whether their friends were not arriving because they were over awed by such a party and that’s why they hadn’t come.  They even began to worry if it was because the football ground backed on to the local estate, they were afraid to park their Mercs and Beamers on the street’.

Could everyone have other things to do?  Did everyone have some excuse?  What had they done to offend people?  They hadn’t been boasting about the party, they just wanted to celebrate the happy occasion with all their friends and family.

Two hours went by and still no one had turned up.  The family were disappointed and the father was thinking about how all the food was going to waste but it smelt and looked wonderful, his mouth watered and his belly rumbled. Then he thought if all our friends, and business acquaintances, and ladies who lunch and all the great and the good of the community won’t come, then I will go and find people who will.

He left the football ground and the first people he saw was a bunch of lads from the local estate.  One was even sitting on top of a phone box sniffing the air, where the tantalising smell of food was wafting.  They were talking about what was happening at the football ground and as the father approached the lads looked over at him with curiosity.  The father plucked up the courage, cleared his throat and addressed the lad sitting on top of the phone box.

‘We’ve got bucket loads of that in there’ the father gestured back at the football ground.  He asked the other lads what their favourite food was, they each said something different.  The father told them there was food and drink enough for everyone at the football ground, to go out and grab their mums and dads and all their friends off the estate.  To tell them they were all invited to a party.

People piled in, they weren’t what Sarah expected but the evening was a great success.  The band struck up, the people were jubilant, Sarah made friends with people she’d never spoken to in her life.  Her mother had more fun than at a thousand lunches with her friends and the father surveyed the scene with a smile on his face, this truly was the greatest party ever.

This parable was first published in the Fast Game by Richard & Lorimer Passmore; and republished by Frontier Youth Trust as part of talesretold.org, an online scrapbook that brings together a wide collection of parables to resource pioneering discipleship and inspire story telling.