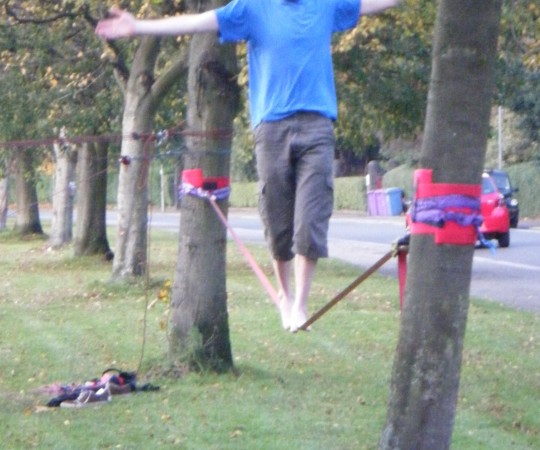 Paying the price and walking a tightrope: youth work an easy target for austerity cuts

My friend Neil has been on the mission field for the last few years. Prior to leaving for shores afar, he and I used to do youth work together. He is soon to return to the UK and is looking for a youth work job. However, I fear he will not recognise anything of the world he left because the statutory youth work world he knew has changed beyond all recognition.

The picture is not a positive one. Local Authority youth centres have closed; services have stopped; staff been made redundant; support for young people has been eradicated; and specialist support for at risk young people (those I serve) has been decimated.

UNISON’s research (The Damage) – based on data from 168 UK Local Authorities – shows that youth services lost at least £60 million of funding between 2012 and 2014. More than 2000 jobs have been lost in that period, around 350 youth centres have closed, and 41,000 youth service places for young people have gone: this is before the austerity cuts have really begun to bite! It has been reported, for example, that London is going to see 90% cuts to its youth services by 2016/17.

Some churches and Christian organisations have seen the demise of the statutory youth service as an opportunity to further their own agendas. Some have taken advantage of the turmoil and formed alliances to take over the running of services and youth centres – centres they have sometimes purchased off councils for as little as £1. Whilst I am not against anyone who seeks to help young people, this type of what economists call ‘accumulation by dispossession’ does make me feel uneasy as it occurs at the expense of other people’s jobs. Even if the faith-motivated youth work sector wants to fill gaps in provision, they often can’t because they are also facing financial challenges because of austerity cuts.

The problem youth work has, if I can call it a ‘problem’, is two-fold. Firstly, providing a youth service is not a defined statutory requirement for Local Authorities. Thus, they are more likely to cut youth services (and things like libraries) because councils prioritise the other services they have to legally provide.  Secondly, young people under 18 can’t vote in UK elections. As one MP recently told me, this means political policies prefer others because there are no votes to be gained from young people. These two dynamics mean youth work is an easy target for those making austerity cuts and youth work ends up walking a tightrope.

Perhaps conveniently, and in a manner that abdicates responsibility, central government has declared it is up to local policymakers to determine what servicers are offered to young people in each local area. Paradoxically, this is completely at odds with the one major new initiative for young people government has instigated: the National Citizen Service (NCS). This is an English national scheme that by-passes existing local provision.

NCS is a volunteering scheme. It starts with a residential training event and ends with a graduation ceremony, with 30 hours of volunteering in between. It is orchestrated ‘top-down’ and managed by providers who often have nothing to do with youth service provision. It was originally described as the ‘gateway to the Big Society’– the now somewhat defunct government initiative. NCS publicity describes itself as ‘a once in a lifetime opportunity for all 16 and 17 year olds in England’.

Whilst participant feedback has been positive, NCS has been heavily criticised. It is considered very expensive and poor value for money (it is so well resourced it has even got its own TV advert). Despite this, it has not met recruitment targets. Only 16 and 17 year olds do it and for just a few weeks. It fails to build the type of ongoing relationships those of us doing faith-motivated work consider so important, is not organised around the interests and agendas of young people and is no substitute for meeting their ongoing needs and aspirations. There is also no explanation as to how NCS helps a 14 year old in need on a cold, wet Wednesday evening in February; help they used to access 52 weeks a year via their, now closed, local youth club.

My dialogue with NCS leadership indicates they measure its success mainly in economic terms, rather than the wider and more holistic narratives those of us doing faith-motivated work aspire to. Compared with open-access, ongoing and universal provision, I do not consider how NCS does things advantageous. Even the House of Commons Education Committee (2011) advised that funds earmarked for NCS should be ‘diverted into year-round youth services’.

My new book, Embracing the Passion, is about Christian youth work and politics. It invites us to prophetically and actively help young people flourish whilst pursuing the common good. It calls on us to campaign, speak up for, and help empower young people to be all that God has called them to be. Neil, who I mentioned earlier, has a young family. I fear that if we don’t campaign to reverse the current demise of youth services, then there won’t be any by the time Neil’s children become teenagers.

The 2008/9 financial crash was not the fault of young people, yet they are the ones being punished. I believe ensuring young people have things to do, safe places to go and opportunities to develop are key for all our futures. What is currently happening risks depriving everybody of a more positive future. This needs to change.

A version of this article originally appeared in Urban Bulletin, the newsletter of the Christian Coalition for Urban Mission

Dr Nigel Pimlott is Deputy Chief Executive Officer for Frontier Youth Trust.  Embracing the Passion: Christian youth work and politics is published by SCM Press and available at a discounted price from www.fyt.org.uk